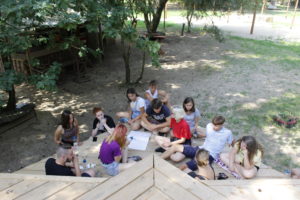 “The group was made up of 12 kids between the ages of 15 and 17 and two team leaders. The Polish association that manages this project is FUNDACJA RODOWO.
The kids in this group are friends, some of them had known each other for a very long time, so that they were not shy and shared the same values. They were well-behaved, and most of them knew the Art Camp very well.

During the three mornings of discussion about the topic, they focused first of all on the historical context, also in relation to the history of ancient Greece. They spoke about the situation during the last centuries and about the consequences.
They compared the situation of Poland to that of the other countries which had been colonized.
And from all these ideas they prepared their own play about colonialism.”